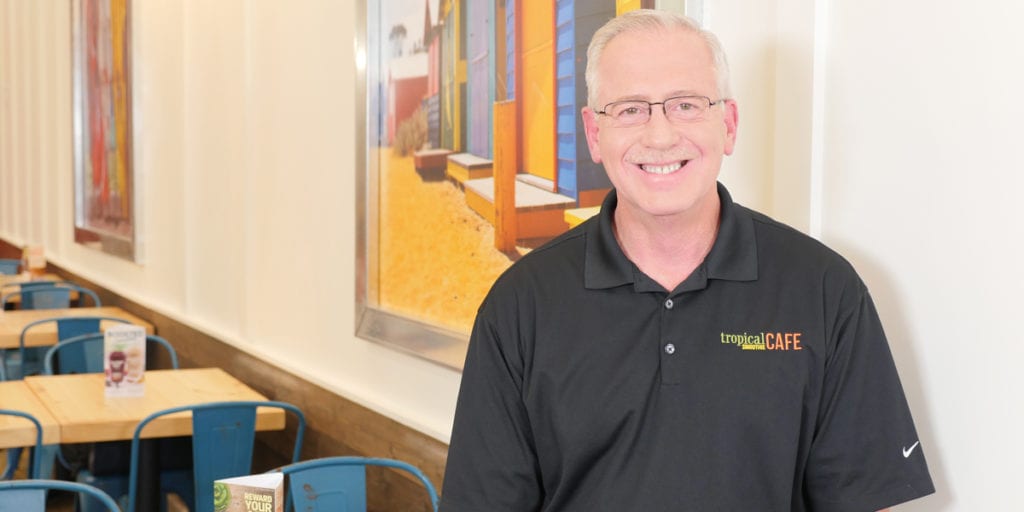 Tropical Smoothie Franchise Owner, Mike Shattuck, has spent over 40 years in the foodservice industry. Holding titles from consultant to president, he has worked with franchisor teams and has run international franchise operations. Wanting to focus more on leadership and team development, he turned to franchising. While starting his own concept would have provided the freedom from corporate America he was looking for, he believed in the power of a franchise system to drive the development of a brand.

“I spent my entire life in the corporate world, and while it was rewarding and provided a lot of opportunities, I always had the dream of owning my own business,” Mike Shattuck says.
“Primarily because I have some very strong views on how you build culture and how you can build teams. And I spent a career sharing that with other people. I felt like it was time to do that myself.”

Prioritizing great product, strong positioning, and a shared value system, Shattuck’s research and networking led him to the Tropical Smoothie Cafe franchise opportunity. Further convinced by the brand’s economic success, leadership in the industry, and commitment to making their franchise partners successful, his validation only grew as he progressed through the franchise process.

With multiple Tropical Smoothie Cafe locations now under his belt, Shattuck’s experience has been helpful throughout the process. “Having been a senior member of franchisor teams and running international franchised operations, I have perspective from both sides of the relationship. This, along with my extensive foodservice experience, will be a key contributor to the success of my Cafes.”

Read more about Mike Shattuck’s background in the food industry and how he went from Franchisor to Franchisee in his interview in Franchise Times “The Pipeline”.