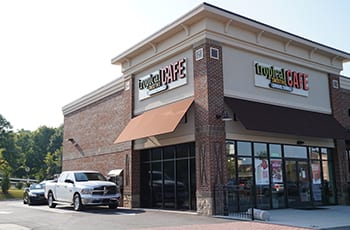 Tropical Smoothie Cafe franchisee Hani Halloun hails from a village outside of Haifa, a port city in Israel. He left Haifa after high school, eventually becoming a hairdresser.

“I didn’t see a future for me there. So I went to Europe and started doing hair and selling paintings in the street to make a living. I went to Holland,” he said.

By the mid-aughts Halloun was living in Grand Blanc, Michigan, still “doing hair” but also operating his own liquor and convenience stores as well as several grocery outlets. He was also about to become a franchisee.

“When I was doing hair, I was very busy,” he recalled. To keep his waiting customers happy, he offered to buy them smoothies from the Tropical Smoothie next door. “Customers loved it, and they looked forward to me buying them.”

Halloun, who said he has a knack for organization, studied the smoothie business, eventually signing a franchise agreement with the Atlanta-based franchisor. He operates eight stores in Michigan, three in Grand Rapids and five in the Detroit metro. He won’t add more cafes in Michigan, he said.

In September 2019, he teamed up with Edward Joubran to open their first (and Tropical Smoothie’s 800th) unit in Arlington Heights, Illinois. The pair have since opened two more and are planning to add another nine in Chicago suburbs by the end of 2021. “We may have three of them underway by the end of this year,” Halloun said.

Joubran, who joined the interview, said he’s known Halloun for more than 30 years. A relative of his works in one of Halloun’s grocery stores. “One thing led to another, and I wanted to invest for the future,” he said. Halloun handles store operations while Joubran oversees administrative duties.

Meanwhile, the pandemic hurt sales in its first month. “It was tough for all the stores,” Halloun recalled. “But we stayed open and got more traffic through the drive-thrus and online ordering.” Five of his eight cafes, all endcaps, have drive-thrus and have done better, he said, than those without.

Except for one. “I just opened another store in Canton,” Michigan, “without a drive-thru, and that’s doing even better than the drive-thrus,” he said.